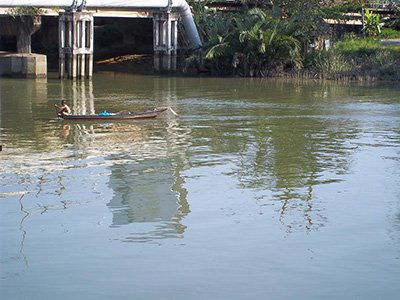 Thailand’s Pollution Control Department has recently announced the results of its river testing program. It found the upper stretch of the Tapi River (also spelt Tapee) in Nakhon Si Thammarat Province to be the cleanest in the country. Such low levels of pollution haven’t been seen in 5 years.

These pollutants are caused by untreated sewage being flushed into a river, fertilizers and pesticides from agriculture and industrial waste. The upper stretch of the Tapi is in a pristine area with little agriculture, low human population density and little industry. These are clearly the reasons for the healthy state of the river.

The survey of rivers concluded that 17 rivers were ‘good’; 26 rivers were ‘fair’; 20 rivers were ‘deteriorated’; and 1 river was ‘very deteriorated’. The worst river in Thailand in terms of pollution was the lower part of the Chao Phraya River, obviously due to the pollution entering it from running through Bangkok.

This is the first time in 5 years that any river in Thailand has been found to have low enough pollution levels to merit the ‘best quality’ standard.

This is a great boost to Suratthani and to Nakhon Si Thammarat Province. Those tourists looking for unspoiled nature will be drawn to the area following this report. It is important that any upturn in tourist activity along the Tapi River will not cause any deterioration in the cleanliness of the river.

No votes so far! Be the first to rate this post.

There are three ways to get from Surat Thani City to Surat Thani Airport, which is a journey of 27.4 km. Your alternatives are to (1) take a public minivan from the city centre to the [Read more…]

There are six companies which travel direct from Surat Thani Airport to Koh Samui. The alternatives to taking a direct service are: (1) get a taxi direct to the ferry port in Donsak or (2) [Read more…]